SOMERSET — With the Braga Bridge and the city of Fall River behind him, President Joe Biden on Wednesday announced new actions on climate change that he vowed to take on his own, just days after an influential Democratic senator quashed hopes for a sweeping legislative package of new environmental programs this year.

Biden unveiled the latest efforts during a visit to the former coal-fired Brayton Point power plant, which is shifting to offshore wind manufacturing. It’s the embodiment of the transition to clean energy that Biden is seeking but has struggled to realize in the first 18 months of his presidency.

Biden announced that his administration will advance offshore wind lease opportunities in the Gulf of Mexico as well as off the coasts of Florida, Georgia, South Carolina and North Carolina, distribute over $2 billion via FEMA to states that want to build cooling centers, and provide $380 million via HUD to help people access Low Income Home Energy Assistance Program funds to pay for air conditioning and reduce energy costs.

The trip comes as historic temperatures bake Europe and the United States. Temperatures reached 115 degrees in Portugal as wildfires raged in Spain and France, and at least 60 million Americans could experience triple-digit temperatures over the next several days as cities sweat through more intense and longer-lasting heat waves that scientists blame on global warming.

Biden did not declare a national climate emergency, but said that the climate crisis is an emergency “and I will look at it that way.”

Sen. Ed Markey, D-Mass., who joined Biden on the trip from Washington, D.C. to Somerset, said on Tuesday that he was “confident that the president is ultimately ready to do whatever it takes in order to deal with this crisis.”

“I think that he’s made that clear in his statement last Friday, and I think coming to Massachusetts is a further articulation of that goal,” Markey said.

A new report says the U.S. and other major carbon-polluting nations are falling short on pledges to fight climate change. Among the 10 biggest carbon emitters, only the European Union has enacted policies close to or consistent with international goals of limiting warming to just a few more tenths of a degree, according to scientists and experts who track climate action in countries.

Traveling with the Biden

There were several hundreds gathered along the road in Somerset after the motorcade pulled off the highway.

After the speech, Biden returned to T.F. Green around 4 p.m. He boarded Air Force, which took off for Washington at 4:16 p.m.

What else did he say:How do you pronounce Rep. Jake Auchincloss’ last name? Biden flubbed it

Did Joe Biden say he has cancer?

About two-thirds of the way through his speech in Somerset, Biden was telling a story about growing up in Claymont, Delaware. He was relating his memories of his mother wiping oil slicks off their car, to Gina McCarthy’s stories of people in Somerset taking rags to wipe the coal dust off their cars.

Biden was advocating for clean energy and the removal of toxins and debris from the environment when he said: “That’s why I, and so damn many other people I grew up with, have cancer, and why can- — for the longest time, Delaware had the highest cancer rate in the nation.”

Here’s what we know:Did Joe Biden say he has cancer in his climate speech at a Massachusetts power plant?

“This is what the President was referring to,” Bates said.

What can one person do?:One thing, then the next, until you change the world

Who was with Biden in Somerset 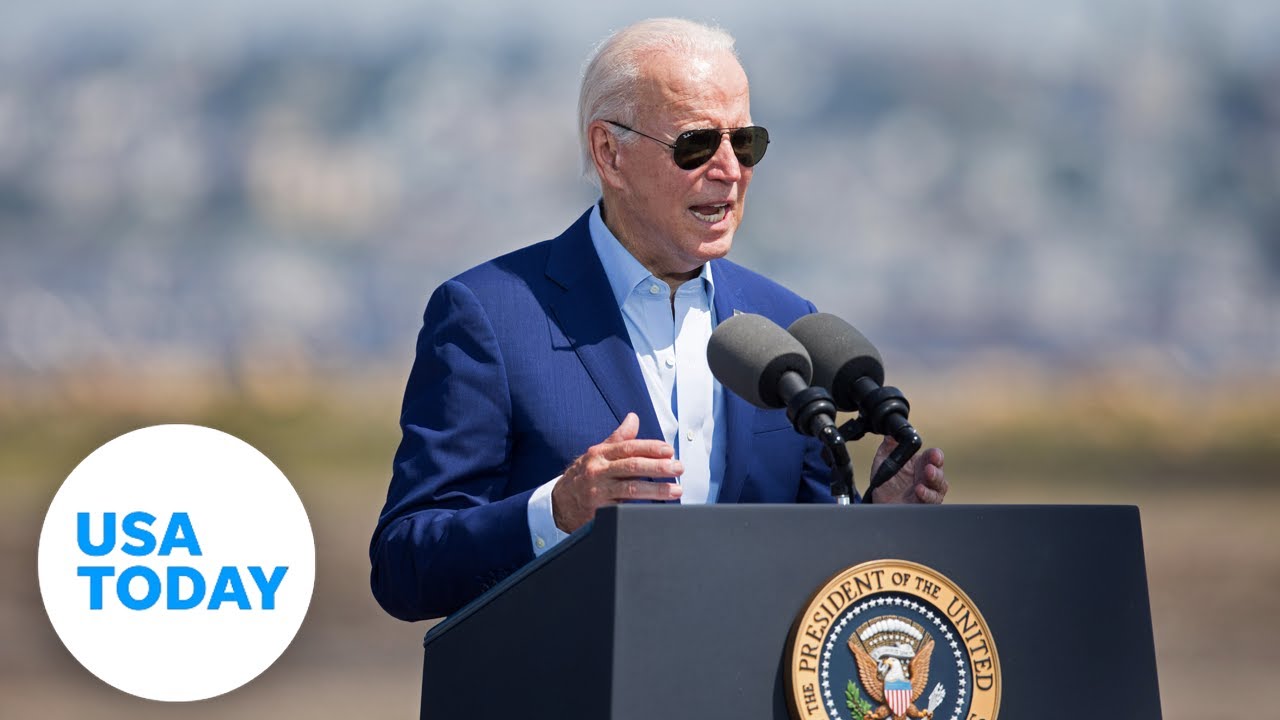 Allen Smith, Chairman of the Somerset Board of Selectmen

Gina McCarthy, Assistant to the President & National Climate Advisor and a Massachusetts native, talked to the press aboard Air Force One about the trip to Somerset.

“[Brayton Point] is a great backdrop. It does sort of show off the work that we’re doing on offshore wind, which is really remarkable and way beyond our expectations,” McCarthy said.

Brayton Point Power Station was built by New England Power Co. on 306 acres of land in Somerset where the Taunton River meets Mount Hope Bay. Construction started in the late 1950s, with the plant commissioned in 1963.

The plant, which was one of the largest coal power plants in New England, was closed in 2017.

McCarthy highlighted the work being done as well as the transition of an old power plant in California that is being used to manufacture batteries and one in Wyoming that is focused on new generation nuclear.

“It really shows, you can turn an old power plant into something new,” said McCarthy.

One of the upcoming actions by the administration will be distributed over $2 billion via FEMA to states that want to build cooling centers, and $380 million via HUD to help people access LIHEAP funds to pay for air conditioning and reduce energy costs.

President Joe Biden touched down at Rhode Island TF Green Airport in Warwick just before 1:15 p.m. Wednesday on his way to speak at the former Brayton Point power plant in Massachusetts.

He was greeted on the tarmac by Rhode Island Gov. Dan McKee, U.S. Sen. Sheldon Whitehouse and Warwick Mayor Frank Picozzi. (The air temperature was 94 degrees when Biden landed.)

Whitehouse joined Biden and members of Massachusetts congressional delegation including Sens. Elizabeth Warren and Ed Markey on to Somerset. Their motorcade left the runway at 1:37 p.m. toward Providence and Route 195.

Asked by reporters what he had told the president, McKee said he had thanked Biden for letting him visit the oval office earlier in the year and for his support “for both the offshore wind issues for Rhode Island, which he is here to talk about in Somerset, and also for the Supreme Court issues that we are dealing with right now,” a reference to the overturning of Roe. v. Wade.

Did Biden have any good news for Rhode Island’s hopes of landing new offshore wind investment or jobs as it competes with Massachusetts and Connecticut?

“When I met with him and a consortium of governors on the East Coast he made very clear that he wants us to succeed and he knows the legislation we passed that will increase our usage on wind and we are the first in the country to have it,” McKee said.

He said Biden had not mentioned anything about declaring a national climate emergency, but thought “if he decided to go in that direction that would be fine.”

Last month, the administration launched a federal-state partnership committed to growing the offshore wind power industry, with the specific aim of bolstering the supply chain needed to get wind farms up and running.

Brayton Point is a prime example of how energy production has evolved in recent decades. Once the home of a coal-fired facility so notorious for pollution it topped a list of the “Filthy Five” most environmentally harmful plants in the state.

Here’s who is traveling with the president to Somerset

Rhode Island Gov. Dan McKee will be at TF Green Airport to greet the president when he lands in Rhode Island ahead of the giving a speech on climate change in Massachusetts.

Biden is traveling with many members of the Massachusetts delegation to Washington today. Here’s who is traveling on Air Force One en route Somerset:

Bruce Reed, Assistant to the President & Deputy Chief of Staff

Gina McCarthy, Assistant to the President & National Climate Advisor and a Massachusetts native

Vinay Reddy, Deputy Assistant to the President & Director of Speechwritin

Where is Somerset, MA

Somerset, Massachusetts, is a suburban town just west of Fall River. There were 18,303 people living in the community, according to the 2020 census.

The Bristol County town is 44 miles south of Boston and 20 miles southeast of Providence, Rhode Island.  It is located on the western shore of the Taunton River and Mount Hope Bay.

Biden will be the first president in Somerset, MA

President Joe Biden’s trip is apparently going to be brief, but while he’s in town he should make the most of his trip. Will he stop and visit any local businesses?

Dan Medeiros created a 5-point itinerary for the president to follow during his stay.

Other presidential visits to Somerset area and Fall River

Scrolling through the history books, it is clear many presidents have passed through the SouthCoast region. Others made it to the area before and after they held the country’s highest office.

Praising the area for its work ethic and “modern” workforce is not new. William Howard Taft visited Fall River on June 23, 1911, for the city’s Cotton Centennial Festival, commemorating 100 years of cotton cloth production in the city.

Taft also spoke at South Park, telling the crowd, “I congratulate you again on your wonderful progress and the happiness of your individual citizenship on every side, and wish you Godspeed in making greater steps forward in the next 100 years.” It is believed Taft’s trip attracted roughly 150,000 people.

Why presidents visited the SouthCoast?:Campaigns, summer homes, funerals and more

What we know ahead of Biden’s visit:Road closures, no-fly zone: What to know about traffic and Biden’s visit to Somerset

The U.S. Secret Service, in coordination with the Federal Aviation Administration, is restricting all flights in the area, including drones. There will be a temporary flight restriction within a 30-mile radius of Brayton Point from 1:45 p.m. to 4:30 p.m.

Mayflower Wind: What is being proposed

Holding one of the seven leases for proposed wind farms in 1,400 square miles of federal waters near the coast of Nantucket and Martha’s Vineyard, Mayflower Wind officials say its lease, with 149 turbines running at full capacity, could generate enough electricity to power a million homes in the state of Massachusetts.

Mayflower Wind is going through an application process to run 1,200 MW of capacity cables to connect its offshore wind farm with a planned regional transmission facility in Somerset. The proposal is for two cables running up the Sakonnet River, underground for two miles across Island Park in Portsmouth, RI, and into the Mount Hope Bay, and then a cable to Cape Cod through the town of Falmouth.

What is being proposed in Rhode Island:Mayflower Wind wants to connect wind turbines to Somerset through Portsmouth. Here’s how.

What is being proposed on Cape Cod:Mayflower Wind plans to run electric transmission cable through Falmouth draws mixed views

The latest on Biden’s Executive Action on Climate Change

Brayton Point Power Station was built by New England Power Co. on 306 acres of land in Somerset where the Taunton River meets Mount Hope Bay. Construction started in the late 1950s, with the plant commissioned in 1963.

By 1969, the plant had three power-generating units burning coal and producing just over 1,000 megawatts.

A fourth unit was constructed in the mid-1970s that burned either natural gas or oil, bringing the plant to its total of 1,537 megawatts, enough to power about 1.5 million homes.

In the early 1980s, the first three turbines returned to burning coal.

In May 2017, Brayton Point has received its last coal shipment. The plant was decommissioned and closed its doors.

Power plants in Massachusetts:This MA neighborhood was supposed to be protected. Now a fossil fuel plant is being built